Most animation in Earth Studio is handled by the Camera Position and Camera Rotation attributes. Additional attributes allow you more creative control over the appearance of the Earth.

Attributes can be added and removed from the Attribute List using the Add Attributes menu. Simply check an attribute to enable and display it in the timeline, and it's ready to be keyframed and animated.

If you uncheck an attribute, it will disappear from your timeline and revert to its default value. However, the “disappeared” keyframes are saved and will reappear when the attribute is added back to the scene.

The Camera Target attribute creates a "look at" point in the scene. Existing camera rotation values will be overridden so that the camera always looks directly at the target.

The Roll attribute allows you to bank the camera to create interesting compositions and fly throughs.

The feature is currently experimental as there are a few known issues: Atmosphere fades off when rolling the camera at low tilt, and Sun location inverts when hitting 90 degree roll while the camera is tilted. This can be mitigated by enabling the “Time of Day” Attribute. Additionally, we recommend using the timeline scrub inputs to navigate as the mouse navigation controls are not optimized for Roll.

The Field of View attribute controls how much of the world displays in the frame. Changing this value is like changing the focal length of your camera lens.

In Earth Studio, field of view is measured as an angle in degrees. At higher angles, you see more of the world (a wide-angle lens effect). Lower values restrict the camera's view (a telephoto lens effect).

Time of Day is a powerful cinematic effect. When enabled, Earth Studio renders realistic lighting, stars, and atmospherics based on the position of the sun. These elements are controlled by a date and time (GMT) value.

Depending on your location and the time of day at that location, Earth Studio will simulate daylight, nighttime, dawn and dusk. At high altitudes, Earth Studio renders a nighttime texture of the Earth with city lights. This texture fades out between 8000 km and 3000 km.

The appropriate shading is applied to 3D features on top of their existing textures, based on the angle of light. Shadows are cast by clouds on the landscape beneath them.

Star data is sourced from the European Southern Observatory, and is positioned in the sky appropriately based on the set date and time. This data is incredibly precise. All the celestial bodies are correctly mapped; even a solar eclipse will be visible in Earth Studio at the exact time it's scheduled. (Don't believe us? Check out the USA on 08/21/2017 at 18:27 GMT)

When Time of Day is enabled, Earth Studio will generate accurate atmospheric effects. These look especially beautiful at dawn and dusk.

Just like in reality, atmospherics are affected by the weather. So if it's cloudy or rainy at your location, the scene will appear blue and overcast. 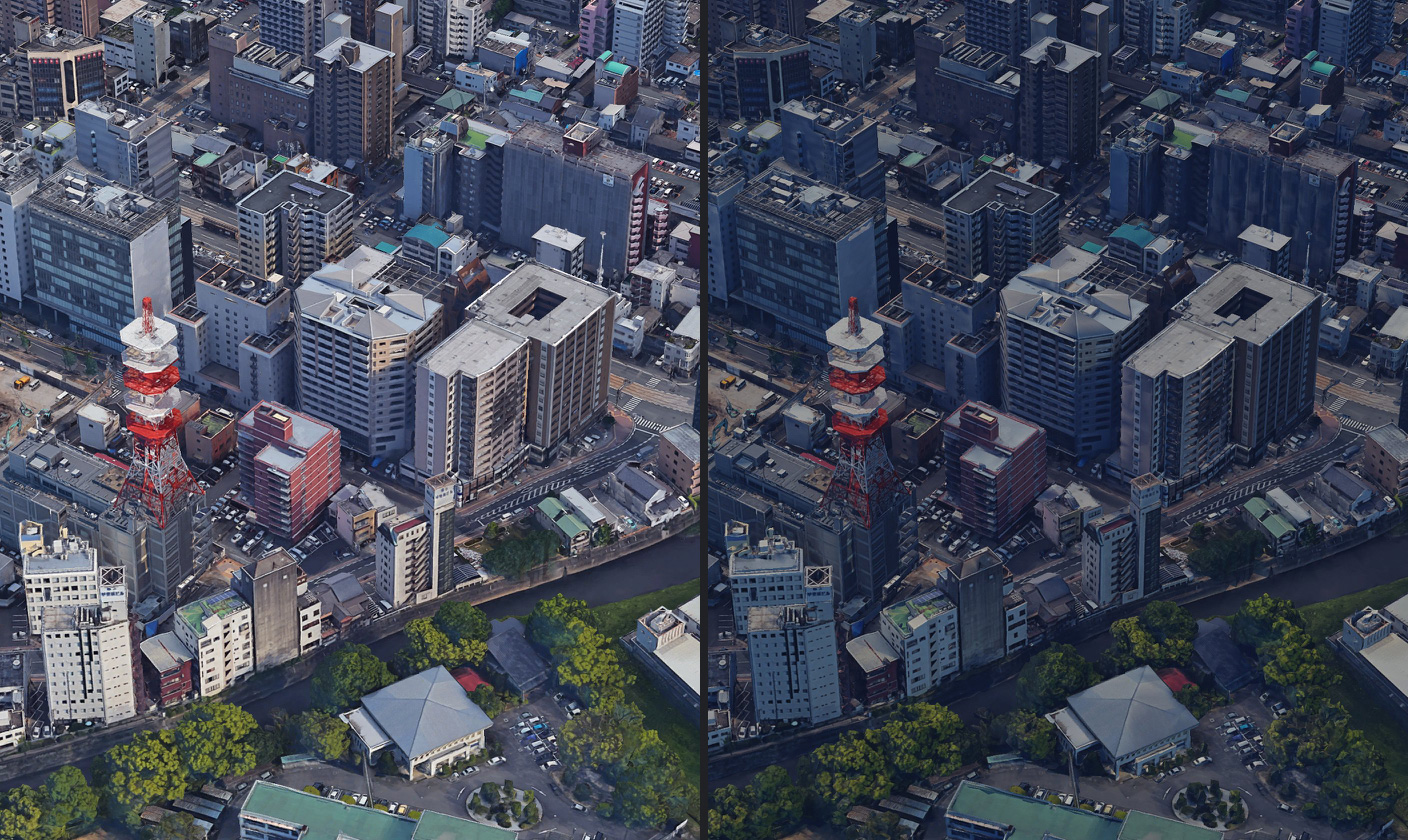 A clear sky vs. a cloudy sky at the same Time of Day. Overcast skies create a blue cast in the atmosphere.

Earth Studio renders clouds over the Earth by default. Cloud data is pulled from NOAA multiple times a day, so you'll always have a fairly accurate depiction of current weather patterns around the world.

Sometimes, you might not want to display the clouds at any altitude—they might be blocking your subject, or generating dreary weather atmospherics with Time of Day enabled. The Clouds attribute allows you to toggle clouds on and off as needed.

By default, Earth Studio displays the ocean topography when rendering the world's oceans. Set the Ocean Overlay attribute to on to render a smooth ocean surface. When combined with Time of Day, you can achieve beautiful lighting effects as the sun reflects off the water. 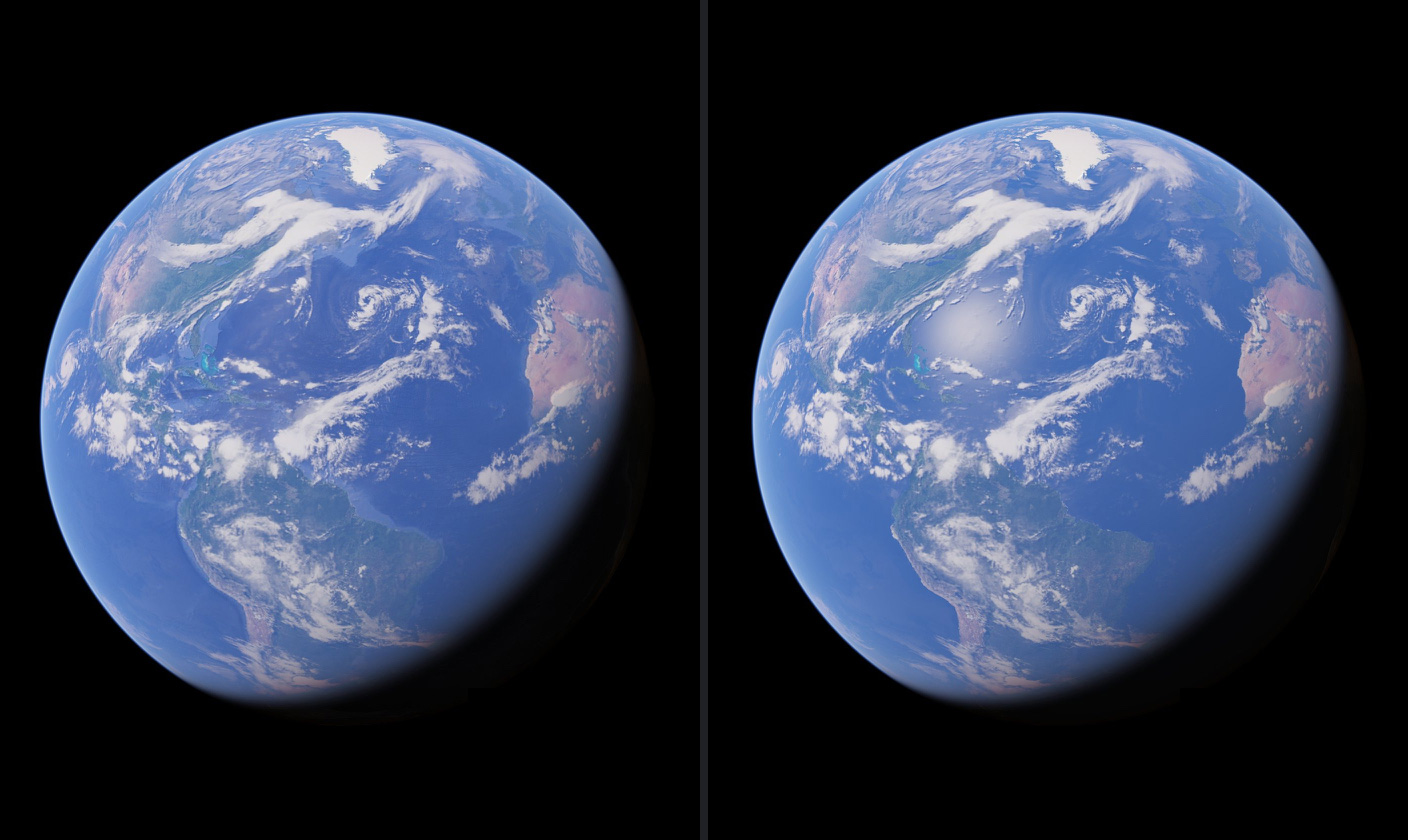 Ocean Overlay off vs. on

Depending on the angle of your camera, the ocean overlay will fade out between 630km and 400km until the ocean topography is fully visible again.